Algoworks recently won the 2017 WebAward for Outstanding achievement in Web Development presented by the Web Marketing Association (WMA). The competition was held in order to acknowledge the best web developers.

As the company was expanding the knowledge base and working on many new and different technologies, creating a website that could reach global clients was necessary. The idea was to create a site that was engaging, appealing and attractive, also, easy to browse through. A lot of thought process went into the making of such website which could gain us beneficial connections and noble clientele.

Throwing some light on one of the biggest challenges, Mr. Nauman Ahmad, Marketing Head at Algoworks remarked, “Algoworks services are unique in their own way. In the IT world, while most company websites work exclusively on mobility or CRM services or ECM or SPE services,the good thing is that we are unique, providing country’s finest services on such different domains all under one roof. But our first challenge in building the roadmap was to decide how to talk about our services on each domain, such that one’s presence does not underwhelm the service providing capabilities of the other besides the obvious challenge of completely different sort of audience it was meant to with each different technology.”

The technologies used by the developers were PHP and WordPress CMS for establishing the website. The team faced a lot of challenges at different levels of development stages while developing the website. Creativity was one department that was given the most freedom to get the best outcome. However, this was the only exception. Other involved departments underwent robust restructuring and planning to get an effective output to get the best laid-out implementation out in the market. The website boasts of unique design for each different page, respecting the theme and the content and disregarding the conventional one-theme website. Mr. Nauman commented, “The strategy was to cater to the audience in their language, than to try to impress someone in particular by the overall website. Irony, however, is that we did get rewarded anyways which confirmed our previously questioned belief that customer comes first, and if we respect that, the recognition indeed follows.” 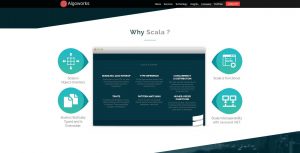 Animations on the website required deep knowledge and understanding of the subject of the page including technologies being used. The primary challenge was for the designers to understand the technology. The secondary challenge was for developers to implement the planned animations efficiently by programming into website. Since animations require scripts which slow down website loading speed remarkably, the final and the most important challenge was to do it efficiently, subjecting website to rigorous optimizations at various levels.

Toward the end of the development phase, the website was subjected to rigorous testing, and automated scripts were implemented, some via tool and mostly custom written scripts to check the performance of the website and compatibility with the servers. From testing the site speed, to checking its code in all major browsers, compatibility on all the most popular and latest devices, Algoworks, testing lab with more than 70 devices was utilized for this project and it took a long time as a lot of corrections, updates, upgrades, and synchronization and operational settings were optimized on the backend as much as the efforts were spent in improving the UI/UX of the website. Having committed mistakes of not using the marketing guidelines of some of the technology products Algoworks works on, the technology leaders contacted and requested the team to re-align the website content, both textual and imagery, as per the guidelines of their marketing document. The team also had to launch very light themed, cleanly designed landing pages for ads, but before the final template was finalized, designers had had four rejected implementations on the grounds of ‘slow page loading times’, since landing pages are supposed to be super light and lightning fast than regular website pages. Note that these landing pages cannot be crawled and are orphan pages, hence you may not be able to browse them from www.algoworks.com.

As for the website challenges, the website designing unit had to consult the most experienced tech gurus in the company to help map a plan and re-align the efforts in the right direction to help the team cross the hurdles. They helped us pick the right plugins on the WordPress backend, helped customize and clean up the backend for a fantastic admin experience, and did a remarkable contribution in driving all forms fthe contact forms via single form, and recommending strategies for developers to get a high performance for the unique design of the website.

The end result, however, was achieved as planned and the praises by one and all seemed to confirm that the project was one of the most well planned and successfully executed projects. Mr Nauman concluded, “This is overwhelming. When we began to write the story for our website, we started right from the scratch and the route we decided to opt seemed not so conventional. Eventually, the journey to completion has been incredible, thanks to the unparalleled commitment of the creative bunch on one hand and our research specialists in the team on the other hand. Getting recognized by none other than WebAward is indeed an accomplishment and we would like to learn more from what the judges have as feedback besides the praise they have honored us with”.

The company’s co-founder and Director, who himself invested a lot of time personally into the making of the website, was thrilled to have won the 2017 WebAward, “A lot of creative thinking was gone into the making of our website as we wanted it to stand out, and it did. We are really glad and feel honored to receive such a prestigious award. Bagging the 2017 WebAward in the category “Best Information Services Website” has added a feather to our cap. I believe everyone at Algoworks is really proud of the commitment for perfection each and everyone involved has exhibited in the Marketing team.”