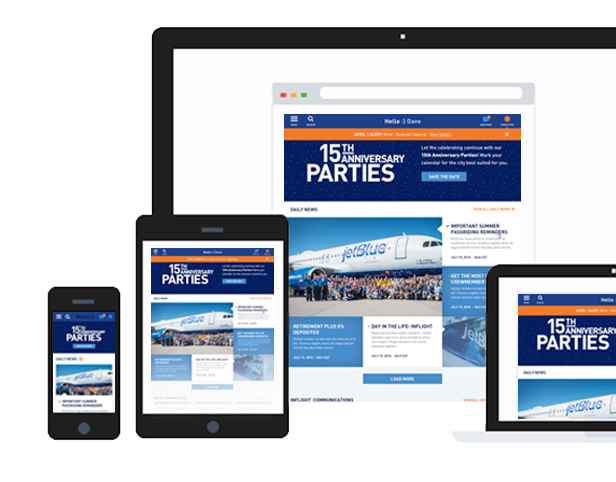 The Web Marketing Association is proud to present this

JetBlue, the sixth largest airline in the United States, was eager to depart from "intranets of the past" with its reimagined intranet, HelloJetBlue.

HelloJetBlue, is a valuable tool designed to engage, educate and connect JetBlueâs global staff or âCrewmembersâ to inform them about key news and resources. This mobile optimized intranet is designed for JetBlueâs remote staff, and is an integral component to the organization which is designed to build a sense of community.

HelloJetBlue features news, tools, alerts and resources to support the day-to-day operations for the airline. Imarc reimagined JetBlueâs previous intranet, with users in mind, to craft a tool that employees would want to engage with. HelloJetBlue incorporates the iconic brandâs identity through animation, tone and even itâs use of puns, such as âThatâs Flyâ when a user âlikesâ content featured on the site.

The new HelloJetBlue gives Crewmembers a means to connect in ways that they couldnât before by communicating important company news, personal travel experiences and mentioning and sharing content with fellow Crewmembers.