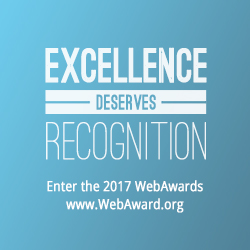 The Web Marketing Association is looking for the best non-profit and advocacy Websites in the world as part of their 21st annual international WebAward Competition for Web site development at www.webaward.org. The WebAwards is the standards-defining competition that sets benchmarks for 96 industries, including advocacy, arts and non-profit websites, based on the seven criteria of a successful web site. The deadline for public interest websites to enter is May 31, 2017.

There is also a reduced entry fee for sites entering the Non-profit industry category.

Web sites are judged on seven criteria including design, innovation, content, technology, interactivity, copy writing and ease of use. Each WebAward entry is judged against other entries in its industry category and then against an overall standard of excellence.

All entrants benefit from receiving valuable feedback in terms of their specific scores compared against the average scores for their industry. They also may receive specific comments from the WebAward’s professional judging panel on their Web site development efforts.

Winners of a WebAward in the public interest categories will also receive:

Each year the Web Marketing Association names the Best Advocacy Website based on the scores submitted by the competition judges.

Recent winners of the Best Advocacy Web site include:

2008 – Clarity Coverdale for Fury Are You Ok With That?

Recent winners of the Best Non-Profit Web site include:
2016 – Perficient Digital for The Henry Ford

2015 – Coyne PR | The Christopher and Dana Reeve Foundation for

2008 – Reading Is Fundamental for Leading to Reading

2005 – IconNicholson for Project Rebirth Web Site
2004 – I.T. UNITED Corporation for WWF Children of the Earth
2003 – I-SITE and AWARE Foundation for Teen Health Talk
2002 – Interactive Knowledge for Corridos Sin Fronteras
Non-Profit and Advocacy Websites can be entered into consideration for the 2017 Best Advocacy Website WebAward at the WebAward Website.