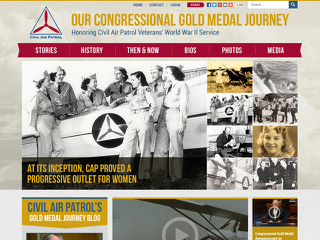 The United States' Civil Air Patrol was founded in the late 1930s, and was officially recognized as the auxiliary of the U.S. Air Force in 1948. Its three primary missions are aerospace education, cadet programs, and emergency services. The Civil Air Patrol Gold Medal honors Civil Air Patrol veterans' World War II service and was signed into law May 30, 2014.